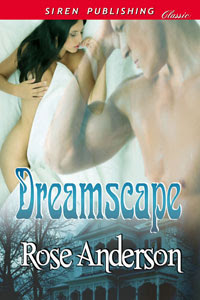 First five sentences of...DREAMSCAPE
“I’m so excited, Ben, look!” Lanie held out her trembling hand. “I’m shaking all over. I’ve never been inside the gate before.”
Looking up at the massive house with its several boarded windows and shutters barely attached, Ben Danowski turned to her in surprise. “Lanie, are you sayin’ you bought this place without looking inside?”

(Becky here: Actually, this is six sentences, but who's counting...)

1. Tell me about the first novel you ever wrote? Whatever happened to it?
My very first novel was a labor of love written approximately fifteen years ago. My husband and I were involved in the restoration of a pre-Civil War house. It was a plain little structure. As far as the history in our area goes, this type of structure was what was built after log cabins. The humble little building was filled with curiosities, namely a trap door in the floor and a hidden room in the cellar. Needless to say it took my fancy.
I love history, so does my husband. We already had a lot to go on when we started working on the restoration project. We knew who the families were when the house was built, we even knew who the builder was. Together we researched and learned all we could about the various farm family neighbors living nearby when the house was newly built. Communities were tight back then. If you were to drive down the back country roads here, you’d find roads and cemeteries with blended names – the many families related to one another through marriages that took place in the 1800’s.
My story took the original family, a few of their children and several neighbors and coupled this information with known abolitionist happenings in the area. In my mind, the mysterious room and the trap door to get into it became a haven for a family of run-away slaves. And for all we know, my little work of fiction is based in fact. The oldest residents in the area remember hearing about a secret room and they called it a hidey hole. This term will get some notice in places of high abolitionist activity.
My story centers on the original family and the dangerous steps they took to see another family to freedom. In this tale, a modern brother and sister discover their family’s role on the Underground Railroad through a journal hidden in a secret room discovered by accident. The two stories entwine as greed battles with good.
I submitted it all over the place using an entire tree’s worth of paper because this was the time before electronic submissions. I never heard a peep. That was disheartening. I tried again this year with a single submission and the courteous publisher actually sent me an email saying it was a wonderful little story but unfortunately the market now was looking for the next Harry Potter. He said I might consider e-publishing or self publishing because it was unlikely to be picked up in this market at this time. It was nowhere near the scope or imagery of Harry Potter. My little story was a Youth story along the lines of Little House on the Prairie. He added another useful bit. He said with Kindles coming down in price, the industry would be seeing them in the hands of children soon. It might do well in that format. His comment was invaluable. I’ll be doing exactly that soon. Not as Rose Anderson though. :) It wouldn’t do to mix my writing.
2. What was the first Rated R movie you ever saw?
The first movie I snuck into acting older than I really was, was the Exorcist. Scared the bejeezus out of me too. The first legitimate R-rated movie was Roman Polanski’s MacBeth. Marvelous movie that. I love Shakespeare. All these years later, I found MacBeth online and watched it again. It’s still a very cool, true to the story rendition of the Bard’s work.
3. What’s the first thing you do when you start writing a new story?
The very first thing, I build the world in my mind. For Dreamscape I’ve been in enough terrific old houses to be able to draw from it visually. I could see the gingerbread, those intricate over-embellished bits of molding and trim the Victorians were so fond of. Having rehabbed old houses, I can envision the jagged panes of glass on the broken windows, the smell in the musty old cellar, the view from the high cupola at the top of the house.
Once the world is set, characters will come walking into it. Before long they tell me their problems or conflicts. I soon discover their likes and dislikes and they’ll eventually tell me where they want to go and who they want to meet. I’ve been told this is writing by the seat of my pants. I’ve found that no matter how hard I try to use an outline, my characters will hijack my best attempt and have their way anyway! I surrender to them and hope they do well by me. :)

You can learn more about Rose on her blog, Google+, or follow her on Twitter @RoseAnderson_.
Posted by Rebecca J. Clark at 12:01 AM