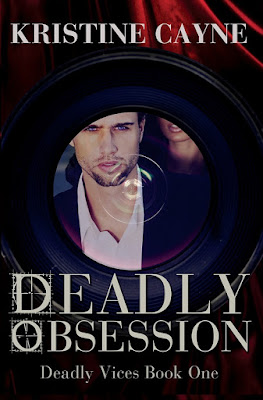 Don’t forget Nic—you belong to me. If you stray, she’ll pay.

The darkened theater closed around Nic Lamoureux like a cave, filled with unknown, unseen dangers. Clenching the cell phone in his fist, he glanced at his Bad Days co-star, Jane Carver, sitting on his right, then at his agent, Vivian Carmichael, on his left. How had the stalker gotten his private number and which woman was the message targeting?

1. What was the first Rated R movie you ever saw?
The first Rated R movie I ever saw was Risky Business starring Tom Cruise. It was my birthday, a group of girlfriends were sleeping over, and we pretty much had the run of the house. And for those of you on the younger side, let me tell you, Tom Cruise was hot stuff at that time. Two scenes I'll never forget: when Tom sings "Old Time Rock and Roll" in his pink shirt and tighty-whities, and the train scene. I've loved Phil Collin's "In the Air Tonight" ever since!

2. What’s the first thing you notice on an attractive member of the opposite sex?
To test this out, I first had to go look at some photos of hot guys. I figured out that the first thing I see is how tall and broad they are. Okay, that's more than one thing, but it goes together. I like men who "look" tall, which doesn't mean they have to be 6'5" or something like that. A man can be 5'9" or 5'10" and still look tall. It's a matter of proportion. In addition, I like men who have a broad chest and shoulders. No skinny model boys for me. LOL.

3. If you had a free afternoon, what’s the first thing you’d do?
My favorite thing to do on a free afternoon, weather permitting (which is quite a rare thing here in "sunny" ), is to sit in my rocking bench on my backyard deck, with a cold glass of ice tea and some strawberries. Once I have all that and I'm well-settled, I dive into a steamy romantic suspense or paranormal romance and spend a couple hours reading in the sunshine. Ah, paradise :)

MORE ABOUT KRISTINE:
Kristine Cayne is fascinated by the mysteries of human psychology—twisted secrets, deep-seated beliefs, out-of-control desires. Add in high-stakes scenarios and real-world villains, and you have a story worth writing, and reading.
The heroes and heroines of her Deadly Vices series, beginning with Deadly Obsession, are pitted against each other by their radically opposing life experiences. By overcoming their differences and finding common ground, they triumph over their enemies and find true happiness in each other’s arms.
Today she lives in the , thriving on the mix of cultures, languages, religions and ideologies. When she’s not writing, she’s people-watching, imagining entire life stories, and inventing all sorts of danger for the unsuspecting heroes and heroines who cross her path.
Readers can learn more about Kristine and her writing on her website/blog, Facebook and Twitter.