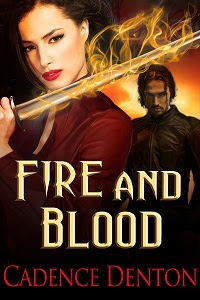 The first four sentences of... FIRE AND BLOOD
She had the Midas touch. Except everything she laid hand on didn’t turn into gold – it exploded in her face.

Which was just what a person should expect when she was cursed, right? How well Jeannette Darcy knew this having lived under that shadow for nigh on six centuries.

Cadence will give away a copy of her new book to one lucky commenter!

1. Who was your first love?
Initially, I chose this question believing it would be a quick and simple answer. When I began to really deliberate I was shocked at the sheer number of my “first” loves.

There was my television first love, The Monkeys’ lead man, Davey Jones. He owned my heart from the first twinkle in his adorable chocolate brown eyes. And when he sang, well, I just knew he was singing only to me. *Sigh*

Mark Maier was my first actual person crush. It was love from the first time I saw him on the playground in the sixth-grade. I thought he was the cutest boy in my class. He even looked a bit like Davey if you squinted your eyes. Unfortunately the feelings were not reciprocated. Oh well, you win some, you lose some.

My first boyfriend love was the incomparable Glenn White. With sun-kissed light brown hair and dreamy blue eyes, Glenn was an exciting older man. One whole year older! Plus he had muscles, his voice didn’t crack, and he even shaved! Ooo lah lah, this was heady stuff for a romantic 13-year-old.

2. Tell us about your first kiss. 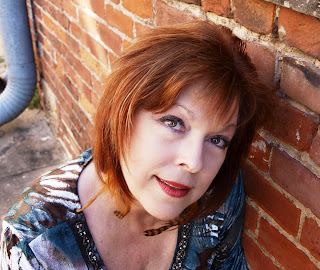 Glenn gave me my first kiss one Saturday night at the local movie theatre (which answers your second question). Though miles and years separate us, I know I’ll never forget the feel of his arms around me, the taste of his lips, or the heat of his breath twining with mine. As far as first kisses go, Glenn White’s was top drawer.

3. If you could live your life over again what’s the first thing you’d do differently or change?
What a great question. Although I choose to live life facing forward rather than looking backwards, if I was gifted with a do-over the one thing I’d change is I’d be fearless.

I’ve wasted too many years, good years, being afraid. Afraid that I wasn’t good enough, smart enough, able enough, pretty enough...you name it. If I could press re-set, I’d erase the inner critic that insisted I couldn’t and give birth to a positive personal trainer / cheerleader that insisted I can, or at the very least, that I try.

More about Cadence:  Cadence Denton lives in a sleepy town on the Louisiana side of the Mississippi River. A fanatical collector of all things Halloween, she shares her writer’s cave with two miniature dachshunds, one standard dachshund, and a perpetually confused cocker spaniel.