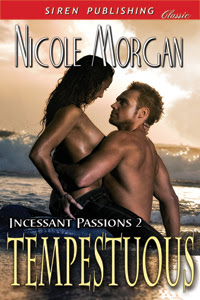 The first five lines of... TEMPESTUOUS

Michelle took several calming breaths, trying to untangle her frazzled nerves before opening the door to the small massage room. His mere presence turned her into a klutz, and she prayed today she would be able to keep her cool. Normally, she was the picture-perfect employee, always professional and cordial with all of her clients, but something about this one kept her feeling like she was constantly trying to walk a tight rope. Despite her occasional mishaps, he always remained kind and never made her feel foolish. She did, though.

1. Who was your first love?
Oh my God! Bad memories! Some complete Dork named, Neil! LOL
2. What was the first Rated R movie you ever saw?
It was a horror movie when I was in grade school, titled April Fools! I still love that movie! J

3. What was the first romance you ever read?
I guess it was a Nora Roberts book, but I couldn’t even begin to tell you the title of it. I’ve read probably hundreds, if not thousands of romance books. It’s hard to keep them all straight! LOL

In additional to her books, Nicole also has a recurring column called, "Sex and the Single Woman" in BT Showcase's online eMagazine. Also, she has recently partnered up with three of her author friends and became Four Seduced Muses, a blog dedicated to the steamier side of romance.
Posted by Rebecca J. Clark at 12:30 AM