The first five sentences of... THE LAPIS LAZULI THRONE 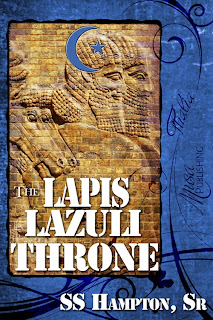 “The desert was alive. Damp foul smelling sand exploded in a white flash. Smoky red and yellow tentacles snaked out of the sand. He tried to scream, but the tentacles choked him. Other screams tore through the boiling smoke that stung his eyes and fouled his mouth…”

What’s the first thing you do after you wake up in the morning (other than using the restroom LOL)?
Pour a cup of coffee and light a cigarette. Really! Sometimes I can do two things at once. That is the way I have started my day for decades; except for the dreamed-of possibility of giving up cigarettes, I anticipate that this is the way I will always start my day for years to come. To start it any other way seems a little unthinkable. Besides, it seems like a civilized way to start the day.

What’s the first thing you notice on an attractive member of the opposite sex?
It is a toss up between her eyes and her face. A woman’s face is like an open book whereas her eyes are like a chapter. Regarding the face, I notice the way the hair—if it is long—frames the face as if it were a painting. I notice the eyebrows, the angle of the nose, the cheekbones and the chin. And the smile. The smile is a real clue to a woman’s personality. It can be warm, sensual, joyful, critical, or mystifying. I have heard the old saying that the eyes are a window into someone’s soul, but to me a woman’s eyes are mysterious. Other than the obvious anger, happiness, or sadness, I can never discern any meaning to a woman’s eyes. That is part of the charm and challenge of meeting a woman. “Who is she? What is she really thinking?”

If you won the lottery, what’s the first thing you’d buy?
The very first thing? A car. I helped my youngest son buy an SUV from a used car company based in . Damned big mistake. The SUV has broken down so many times, and I’m getting ready to sink another $600.00 into it! So anyway, a NEW car with a good music system. I love driving down the highway with the music turned up loud, a French Vanilla Cappuccino, and a cigarette close by. A good running car is freedom to me. Having lived in  for many years, sometimes without a vehicle, I am very familiar with public transportation, meaning a city bus. I lived on the south side of Vegas and for awhile I worked on the north side of Vegas. So, every day I was up before dawn, caught a bus to the southern transportation terminal, hopped a Strip bus to the northern transportation terminal, then hopped another bus to the north side, and from the final drop-off point walked three miles to work. This was only four years ago when I was 54 years old. Anyway, I spent about 2.5 hours to get to work in the morning and 1.5 hours to get home at night (I caught a ride after work to the morning’s last drop-off point), for a total of 4 hours per day. So, to work a 40 hour week I spent 20 hours on the bus and walking. When I started riding to and from work with a friend I was so amazed that it took only 20 minutes one-way by car. Only 20 minutes! Yeahhh, a brand new car. A brand new car is freedom. Considering I’m almost 60 years old and living in the era of “the recession ended in 2009,” well, no one will hire me. The only way to get my freedom back is by winning the lottery. Or writing a best selling novel! 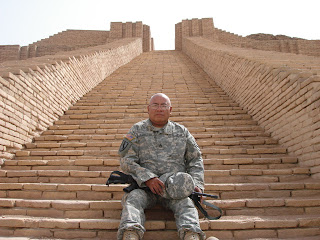 More About SS
SS Hampton, Sr. is a Choctaw from the Choctaw Nation of Oklahoma, a divorced grandfather to 13 grandchildren, a published photographer, photojournalist, and fiction writer. He is a serving member of the Army National Guard with the rank of staff sergeant, and is a veteran of Operations Noble Eagle, and Iraqi Freedom. His writings have appeared in Ruthie’s Club, Lucrezia Magazine, Megaera, The Harrow, River Walk Journal, and Dark Fire, among others. Second career goals include becoming a painter and studying for a degree in photography and anthropology—hopefully to someday work in and photograph underwater archaeology. After 12 years of brown desert in the Southwest and overseas, he misses the , yellow aspens in the fall, running rivers, and a warm fireplace during snowy winters. As of December 2011 in , ,  officially became a homeless Iraq War veteran.