The first five lines of... THE LADY OF THE EVERGREENS

The below is from a Work In Progress titled, “The Lady of The Evergreens.” Because it is a WIP I have not had the pleasure of an editor helping to make me sound like the next Shakespeare or Hemingway, or Faulkner. You get the idea:

Late fall on the southern of seemed like an odd time to hold a ren faire.

But then, Julie Douglas had been told that the Evergreen Renaissance and Fairy Faire was special, and excitingly different. Upon passing through the entrance of two large wooden gates set within low stone built walls she found herself in another time. Excited crowds wandered the torch-lit dirt pathways that wound among evergreen trees short and broad, and tall Norway Spruce from . Scattered along the paths and partly hidden among the trees were Medieval bell tents, broad trade tents, and wooden performance stages…

Who was your first love?
I do not mean to make a mountain out of a molehill, but, first love? I think I’ll ignore my kindergarten teacher and a waitress who worked at the family restaurant. So, when I was in a juvenile detention facility due to dropping out of junior high school, I met this petite black haired woman who worked in administration. In spite of my circumstances, it wasn’t long before I “fell in love” with her. Ruthann was never more than a friend though. And, there was this fleshy girl with long brunette hair who I met at the facility. Barbara was about my age going-on-30 and much more experienced in life than I was. She was a habitual runaway who loved hitch hiking across the country. Not long after we were both out of the facility she found me, and, you might say, taught me a lot about many things. I fell in love with her; but her home was in a nearby city when she wasn't off hitch hiking. I went to work for the Bureau of Indian Affairs, wore a suit and tie, and prepared to forge a middle class life for myself. And then Barbara showed up. She always returned from her latest journey for a visit when I least expected it; she would stay for a few days and then leave again. We finally lost touch when I left for the Army several years later. (No, I am not plagiarizing “Forrest Gump,” but when I saw the movie I immediately thought of Barbara.) The subject of love makes me a little uncomfortable as I have never had a successful relationship. So, from an historical point of view, I doubt if I ever will.

If you had a free afternoon, what’s the first thing you’d do?
If I had money and a car on top of a free afternoon, I’d go to the nearest bookstore (there aren’t that many in ), get a large cappuccino, and spend some time browsing books and magazines. My favorite subject is military history, of course, but also photography and art. And I would buy a few.

If you could live your life over again, what’s the first thing you’d do differently or change?
Go to college and get a degree. Go on to a university and get a higher degree. With a good education perhaps I would not have led such a financially-challenged life (I am almost 60 years old now and am registered in a 2-year VA program for homeless veterans). As we all know, there are a lot of sayings about how money is not everything, but guess what—money is 99% of everything. Money pays the bills, money buys medical care, money can keep you from being evicted from your home or being homeless. If you have enough money, you can even afford to go on a real vacation once in awhile. Everything, especially money, flows from an education—or it did until the Great Recession hit. So, if I could live my life over again, I would be sure to get a good education at an earlier age rather than starting at 53 years old. 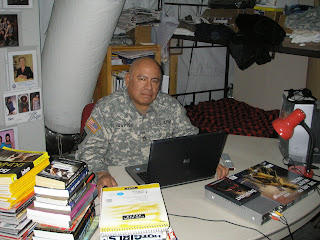 More about SS: SS Hampton, Sr. is a Choctaw from the Choctaw Nation of Oklahoma, a divorced grandfather to 13 grandchildren, a published photographer, photojournalist, and fiction writer. He is a serving member of the Army National Guard with the rank of staff sergeant, and is a veteran of Operations Noble Eagle, and Iraqi Freedom. His writings have appeared in Ruthie’s Club, Lucrezia Magazine, Megaera, The Harrow, River Walk Journal, and Dark Fire, among others. Second career goals include becoming a painter and studying for a degree in photography and anthropology—hopefully to someday work in and photograph underwater archaeology. After 12 years of brown desert in the Southwest and overseas, he misses the , yellow aspens in the fall, running rivers, and a warm fireplace during snowy winters. As of December 2011 in , , officially became a homeless Iraq War veteran.