A to Z Blogging Challenge

Olympia Beer? If you're younger than I am, you probably don't remember it. (You're not
missing much.)

I grew up in Olympia, home of the Olympia Brewery from 1896 to 1983 (then it became Pabst until the brewery closed in 2003). We used ride our bikes there and suffer through boring tours (we were kids) just to visit the tasting room at the end of the tour. No, they didn't serve kids beer. But we did get free pop, which was a treat back then.

Eventually, we figured out how to sneak in at the end of the tour, so we could get free pop without having to endure yet another hideously boring tour.

When I was in college, I found out my younger brother and his friends would sometimes sneak into the brewery...not for 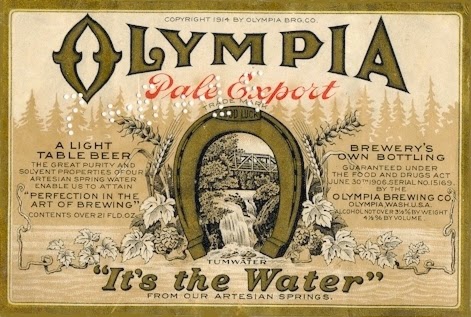 the pop, but into the vat rooms for beer. I mentioned this to a couple of my guy friends at school and they insisted on coming home with me one weekend, and made my little brother take us with him.

So one night, we waited until it was late (after midnight). We pulled my car up next to one of the buildings under a fire escape. We stood on top of my car, reached up for the ladder, pulled ourselves up to it, then climbed up to the second or third floor (can't remember which one). That door was never locked for some reason. How my brother and his friends figured this out, I have no idea.

Anyway, inside was the vat room (don't know what it was actually called, but that's what we called it). Each of the many vats was full of beer. We had our thermoses and containers with us. We opened the vats, leaned way inside, and filled all the containers. Then we climbed back down the fire escape, back into my car, and drove away.

Yikes. Looking back, we could've gotten into SO much trouble. I was a good kid. I didn't break rules. I got good grades. I barely even drank. AND I hated beer. Luckily, the statute of limitations has long since come and gone. I feel safe sharing my story. LOL.

That's the only time I broke into the brewery (or anywhere for that matter), but I'm pretty sure my brother and his friends were regular visitors there in their dead of night vat dipping escapades.